These head injuries can appear way worse -- or much more harmless -- than they are. So take our crash course in what to look for the next time your child hurts herself.

I was less than two steps ahead of my 3-year-old daughter, Jillian, when her foot slipped off our front stairs. Within the seconds it took to grab her off the cement walkway, a nasty goose egg had started to form, and blood was gushing from a scrape above her eye. The result -- a shiny black eye, an unsightly gash, and an odd-shaped lump -- remained for weeks, but the doctor's prognosis was good: Jillian, like most kids who have that sort of accident, would be fine. 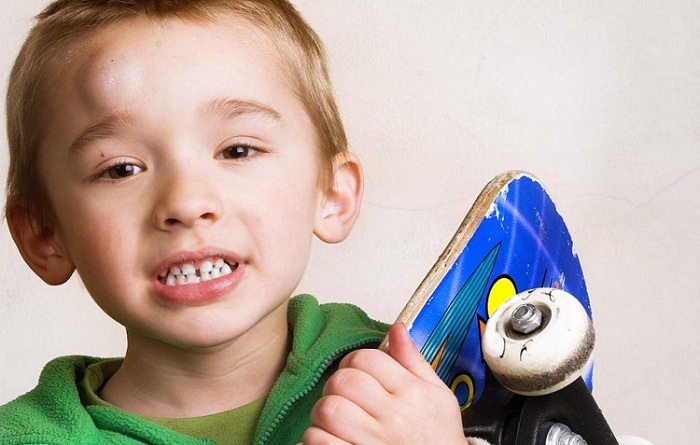 If it feels like your child is constantly taking a tumble, you're probably right. Falls are the leading cause of nonfatal injuries in kids of all ages, and they're the number-one cause of head injuries in those under age 9, according to the Centers for Disease Control and Prevention (CDC). Children under 4 are the most frequent victims of head injuries, and young athletes get mild-to-serious concussions on a regular basis. It's not known how likely it is that a child who hits her head will have a concussion, partly because there's no agreement among experts on the definition of the term in children. Most people think of a concussion as just a bump to the head and assume everything is going to be okay, says Carol DeMatteo, associate clinical professor of occupational therapy at the School of Rehabilitation Science at McMaster University, in Hamilton, Ontario. In fact, a concussion is technically a traumatic brain injury (TBI), though this doesn't necessarily mean that there will be permanent damage. "Even if it's mild, be concerned and watch your child closely," advises DeMatteo. Chances are, your child will one day have a knock on the noggin, so we asked experts to tell us what you should know.

Young kids are the most likely to hurt their head -- and for good reason: They have lots of falls in the tub, and they're less sure on their feet as they're starting to walk. They're testing their limits too. Tricia Honea, of Issaquah, Washington, learned this not long ago. Her 5-year-old son, Atticus, was hanging on a railing at Disneyland's California Adventure, despite her requests for him to stop. "Then he flipped upside down and lost his grip," Honea explains. "He hit his head on one of the decorative rocks and there was blood everywhere."

Most kids' head injuries happen in an instant. Children will roll off a changing table, tumble down stairs, run into each other on the playground because they weren't watching where they were going, or fall off their bike or an ATV (which they shouldn't be riding until they're at least 16, says the American Academy of Pediatrics).

What to Look For

As soon as the accident occurs, and up to a few weeks after, it's crucial to watch for confused speech, lethargy, blurred or double vision, difficulty with balance or walking, vomiting, headaches, and pupils that are bigger than normal or of unequal sizes. Ask your child whether he feels nauseous, has trouble tasting or smelling, or hears a ringing in his ears.

With babies who aren't yet walking or talking, danger signs include bulges at the fontanelles (the soft spots on the front and back of the skull), vomiting, lethargy, difficulty feeding, and high-pitched crying. Head injuries can even leave a dent in the skull. If you notice any of these symptoms, call your pediatrician. Of course, head straight to the emergency room should your child lose consciousness, advises Avinash Mohan, M.D., co-chief of pediatric neurosurgery at Maria Fareri Children's Hospital at Westchester Medical Center, in Valhalla, New York.

That's what Atticus Honea's parents did. Once at the local hospital, they struggled to keep the 5-year-old awake. If they had let him fall asleep, doctors would not have been able to tell whether he was sleeping or whether he'd lost consciousness. In the end, the doctors stapled a flap of skin on Atticus's head and concluded that he had not suffered a concussion because he wasn't losing consciousness; he was just tired. Fortunately, the gash on his head was not a sign of anything serious. There are a lot of blood vessels in the face and scalp, which is why head wounds often bleed so heavily, explains Dr. Mohan.

2. What Happens After the Dianosis

Signs of a concussion are the first thing doctors look for when a child suffers a bump on the head, says Anatoly Belilovsky, M.D., a pediatrician in Brooklyn, New York. "It's the most common type of head injury we see in kids."

Even the most mild form can lead to fatigue and repeated headaches that last for days beyond the injury's occurrence. More serious ones will often cause a child to have sleeping trouble and behavior issues and can affect his ability to concentrate on schoolwork. So after asking whether the injury left the child dazed or knocked out, a physician will perform a basic neurological exam to check vision, hearing, reflexes, and balance.

If the history or exam gives the doctor reason to suspect a more serious injury, she may order a CT scan to check for a far less common type of TBI called a subdural hematoma, when blood builds up between the surface of the brain and its outer covering, called the dura. (A rare subset of TBI is an epidural hematoma, in which blood pools between the skull and the dura. This is what actress Natasha Richardson died from in 2009 after she hit her head while skiing. Richardson initially felt fine, so by the time a scan could be performed to reveal her hematoma, it was too late to save her life.) If the CT scan shows any internal bleeding in the head, doctors may operate to reduce the pressure. Although hematomas can be deadly, they are easy for a trained neurosurgeon to treat if caught -- which is why you should get your child checked out right away.

Life After an Accident

Children who have suffered a concussion should initially avoid any activity that works their brain -- even computer and video games, says DeMatteo. So they may need to stay home from school. They should also steer clear of tumbling, sports, even amusement-park rides. After a few days, they should return for a follow-up visit to see whether side effects persist. (In recent research conducted by DeMatteo, more than 70 percent of the children studied were still experiencing symptoms six months post-injury.) Your pediatrician may ask teachers and coaches to weigh in too. "We really want to know whether your child seems to be back to the way he was before the injury," she explains. "That's the marker we need in order to give a clean bill of health and let kids resume their regular activities."

The number of sports-related concussions is growing. A new study in Pediatrics shows that E.R. visits more than doubled for children ages 8 to 13 over ten years -- 3,800 kids in 1997 to 7,800 in 2007. To highlight the seriousness of concussions, the CDC launched Heads Up, a major public-awareness campaign, with information specifically for coaches. Its aim is to help them spot the signs of a concussion and know how to respond when one is suspected, including removing the child from play. (Even the world of pro football is recognizing the dangers -- in December 2009 the National Football League announced a new policy requiring that players not be allowed to play on the same day after showing signs of a concussion.)

We all know that despite our strongest efforts, we can't watch our kids every moment of the day. But we can use basic safety strategies. Insist that your children wear a helmet when bike riding, scootering, in-line skating and ice-skating, skiing, skateboarding, and sledding. Keep a close eye on young kids who are just beginning to walk or crawl, and be vigilant about putting safety gates across open stairways. Install nonskid mats in bathtubs and guards on windows.

If your child takes a tumble, try to keep your emotions in check. It can mean the difference between a quick recovery and long-term problems. Pay attention to the details of her injury because you'll need to share that info with the doctor. And if she has to go to the hospital, you'll be able to relate to the emergency room physician how far your child fell, how the accident happened, and other crucial details that will help the doctor make good treatment decisions.

Is It a Concussion?

Look for any of these symptoms as soon as the accident happens, and keep watching for them over the coming weeks, says Walter J. Molofsky, M.D., chief of pediatric neurology at Beth Israel Medical Center in New York City.