1.    Interrupting When You're Talking

Why you shouldn't ignore it: Your child may be incredibly excited to tell you something or ask a question, but allowing her to butt in to your conversations doesn't teach her how to be considerate of others or occupy herself when you're busy. "As a result, she'll think that she's entitled to other people's attention and won't be able to tolerate frustration," says psychologist Jerry Wyckoff, Ph.D., coauthor of Getting Your Child From No to Yes.

How to stop it: The next time you're about to make a call or visit with a friend, tell your child that she needs to be quiet and not interrupt you. Then settle her into an activity or let her play with a special toy that you keep tucked away. If she tugs on your arm while you're talking, point to a chair or stair and tell her quietly to sit there until you're finished. Afterward, let her know that she won't get what she's asking for when she interrupts you.

Why you shouldn't ignore it: You know that you have to step in when your child punches a playmate, but you shouldn't disregard more subtle aggressive acts, like shoving his brother or pinching a friend. "If you don't intervene, rough behavior can become an entrenched habit by age 8. Plus, it sends a message that hurting people is acceptable," says Parents adviser Michele Borba, Ed.D., author of Don't Give Me That Attitude!: 24 Rude, Selfish, Insensitive Things Kids Do and How to Stop Them.

How to stop it: Confront aggressive behavior on the spot. Pull your child aside and tell him, "That hurt Janey. How would it feel if she did that to you?" Let him know that any action that hurts another person is not allowed. Before his next playdate, remind him that he shouldn't play rough, and help him practice what he can say if he gets angry or wants a turn. If he does it again, end the playdate.

Why you shouldn't ignore it: Telling your child two, three, even four times to do something she doesn't want to do, such as get into the car or pick up her toys, sends the message that it's okay to disregard you and that she--not you--is running the show. 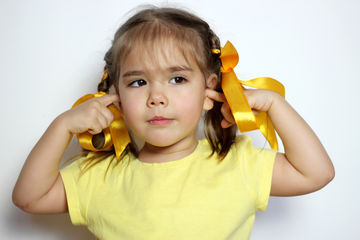 "Reminding your child again and again just trains her to wait for the next reminder rather than to pay attention to you the first time you tell her something," says psychologist Kevin Leman, Ph.D., author of First-Time Mom: Getting Off on the Right Foot -- From Birth to First Grade. "Tuning you out is a power play, and if you allow the behavior to continue, your child is likely to become defiant and controlling."

How to stop it: Instead of talking to your child from across the room, walk over to her and tell her what she needs to do. Have her look at you when you're speaking and respond by saying, "Okay, Mommy." Touching her shoulder, saying her name, and turning off the TV can also help get her attention. If she doesn't get moving, impose a consequence.

When 6-year-old Jack Lepkowski, of Ossining, New York, started practicing "selective hearing," his parents decided to take action. They told him that if they had to ask him to do something more than once, such as come to dinner or take a bath, he would get to watch only one video that day (his usual allotment is two) or he'd miss a playdate that week. If they had to remind him twice, he would lose two videos or two playdates. "I try not to give in because otherwise his selective hearing will continue," says his mother, Lydia. "This tactic seems to be working!"

Why you shouldn't ignore it: It's certainly convenient when your child can get his own snack or pop in a DVD, but letting him have control of activities that you should regulate doesn't teach him that he has to follow rules. "It may be cute when your 2-year-old walks along the counter to get the cookies out of the cabinet, but just wait until he's 8 and goes to visit a friend who lives three blocks away without asking," Dr. Wyckoff says.

How to stop it: Establish a small number of house rules, and talk about them with your child often ("You have to ask whether you can have sweets because that's the rule"). If your child turns on the TV without permission, for instance, tell him to turn it off and say, "You need to ask me before you turn on the television." Stating the rule out loud will help him internalize it.

When 3-year-old Sloan Ibanez took some markers without asking and colored one of her arms completely yellow, her mom, Tanzy, told her that she couldn't help with painting a garage-sale sign later that afternoon. "She cried, but I knew I had to nip this in the bud or else I'd pay the price later because she'd do it again and again," says Ibanez, of Lewiston, Texas.

5.    Having a Little Attitude

Why you shouldn't ignore it: You may not think your child is going to roll her eyes or use a snippy tone until she's a preteen, but sassy behavior often starts when preschoolers mimic older kids to test their parents' reaction. "Some parents ignore it because they think it's a passing phase, but if you don't confront it, you may find yourself with a disrespectful third-grader who has a hard time making and keeping friends and getting along with teachers and other adults," Dr. Borba says.

How to stop it: Make your child aware of her behavior. Tell her, for example, "When you roll your eyes like that, it seems as if you don't like what I'm saying." The idea isn't to make your child feel bad but to show her how she looks or sounds. If the behavior continues, you can refuse to interact and walk away. Say, "My ears don't hear you when you speak to me that way. When you're ready to talk nicely, I'll listen."

Why you shouldn't ignore it: It may not seem like a big deal if your child says he made his bed when he barely pulled up the covers, or if he tells a friend that he's been to Walt Disney World when he's never even been on a plane, but it's important to confront any type of dishonesty head-on. "Lying can become automatic if your child learns that it's an easy way to make himself look better, to avoid doing something that he doesn't want to do, or to prevent getting into trouble for something he's already done," Dr. Wyckoff says.

How to stop it: When your child fibs, sit down with him and set the record straight. Say, "It would be fun to go to Disney World, and maybe we can go some day, but you shouldn't tell Ben that you've been there when you really haven't." Let him know that if he doesn't always tell the truth, people won't believe what he says. Look at his motivation for lying, and make sure he doesn't achieve his goal. For example, if he said that he brushed his teeth when he didn't, have him go back and brush them. When 5-year-old Sophia Hohlbaum started stretching the truth, her mom, Christine, told her the story of "The Boy Who Cried Wolf," in which a boy who'd been lying cries for help for real and people ignore him. "Storytelling helps kids view the problem from the outside in," says Hohlbaum, author of Diary of a Mother: Parenting Stories and Other Stuff. "Now Sophia's very straightforward with me and she's very self-righteous if I don't believe her."